Potter Lake was named after John Fox Potter, a nineteenth-century politician, lawyer and judge from Wisconsin.

John Fox Potter was born in Augusta, Maine, May 11, 1817. His mother, Caroline Fox, was a descendant of John Fox, English Author of the Book of Martyrs published in 1563. One of his father’s ancestors was Isaiah Potter, a chaplain in the revolutionary army. Other ancestors also fought in the Revolutionary War.

John went to school in his hometown, then he studied law. When he was nineteen he traveled west and settled in Wisconsin. Here John became a lawyer.

At that time Wisconsin was a wild and thinly settled. John Fox Potter built a log cabin on a little lake in northeastern Walworth County. The claim consisted of 350 acres. The young pioneer cleared the land with his own hands.

While still living in a log house, Mr. Potter decided to marry. He went back to New York and asked Miss Frances Fox to be his bride. They traveled west and were married at a friend’s home in Milwaukee. The newlyweds then made the journey to their homestead in an oxcart. A new cooking stove for the cabin was also packed in the cart. The roads were almost impassable, the cart wheels sunk deep in the mud. Mr. Potter often told how they sang familiar hymns to boost their spirits. 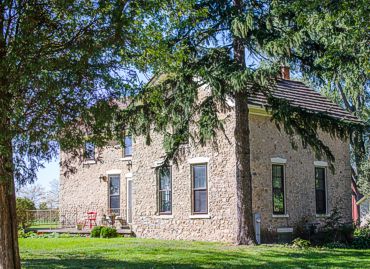 The Home of John Fox Potter

Later Mr. Potter built a big colonial home near the same little lake. Once every five months Mr. Potter made the 24-hour trip to Milwaukee to get provisions and go to the post office. Supplies were often hauled home in a wheelbarrow. A nearby Post Office was opened in 1839. John Potter became the first Postmaster, as he was tired of going to Milwaukee to mail his letters. He was a Postmaster for 2 years.

In 1856 Potter was elected to the Wisconsin Legislature. The same year he was nominated for Congress on the Republican ticket. He won a district that had always elected Democrats. A popular Congressman, he was elected for a second term.

In the years before the Civil War, tempers were hard to control. Arguments sometimes led to fights. Congressman Potter continued to defend his beliefs. When arguments became heated, he sometimes used the muscles that he had developed while chopping trees to clear his land.

Because of his views against slavery, Potter was unpopular with Southerners. A Dixie Congressman, Roger A Pryor challenged Potter to a duel. Potter was opposed to dueling. After thinking it over however, he found a way to show the evils of dueling. He decided to accept the challenge. He announced that the weapons would be Bowie knives. The duel was to take place in a room in Washington DC. Each of the fighters was to have two friends present and the fight was to go on until one of the duelers fell.

These conditions angered Pryor. He refused to fight on such terms. Gentlemen, he said, fought with pistols or swords. Bowie knives were to be used by frontiersmen skinning bear. When Pryor refused to duel, John Potter became a hero in the North; Congressman Pryor became the object of many jokes on the part of the public. He lost face in the South. Some Southerners had considered Northerners cowards. This incident proved them wrong.

Because of his stand against dueling, John Potter was presented with Bowie knives of every size. One of them was eight feet long. As long as he lived, Mr. Potter went by the nickname "Bowie Knife Potter." Read more on the Monster Knife of John Fox Potter at the Wisconsin Historical Society web site.

In 1863, President Lincoln gave Potter a diplomatic post in Montreal Canada. The illness and death of his wife called him back to Wisconsin. He began to practice law and care for his holdings called Lakeside Farms.

In 1865 he married Sarah Fox, the sister of Frances. They lived on the farm in East Troy until her death in 1882. Mr. Potter died in 1899. He was interred in Oak Ridge Cemetery in East Troy. He is remembered as a lawyer, judge, congressman and organizer of the Republican Party.